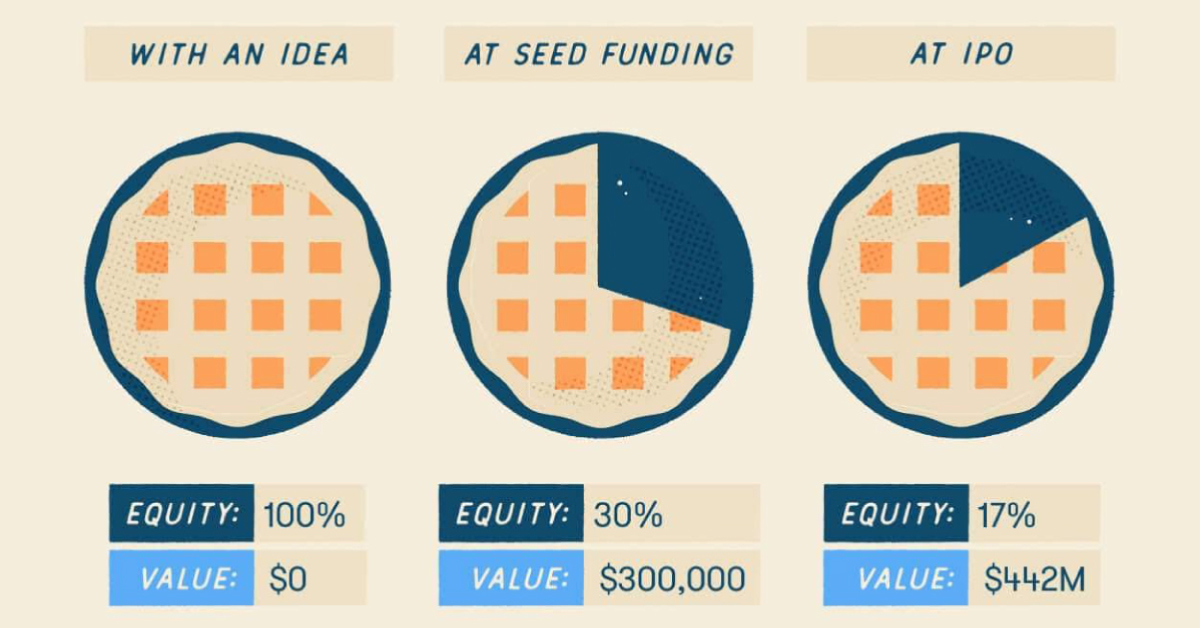 What is a Bootstrapped Startup?

Bootstrapping in business means starting a business without the help of any outside capital such as venture capital and angel investment and growing it internally using limited capital (Harvey).

Rather than seeking outside capital, founders of bootstrapped startups usually rely on their personal savings, debt, and/or funding from friends and family for initial capital (Pujji). A bootstrapped startup usually grows through three stages of funding: 1) beginning stage, 2) customer-funded stage, and 3) credit stage. In the beginning stage, the startup relies on the founder’s personal income, savings, debt, or funding from friends and family. In the customer-funded stage, payments from customers are able to support the operation of the startup and possibly fund its growth. In the credit stage, in order to fund specific business activities (e.g. improving equipment and hiring staff), the startup takes out loans or may begin to start looking for outside investment for expansion (Harvey).

Many successful businesses were bootstrapped until they reached sizable revenue figures and grew to hold powerful positions within their industry; only since then have they raised outside capital. This allowed them to easily attract outside investors and even negotiate for better terms in the credit stage (Kuppusamy). Here are some examples of successful businesses that started out as bootstrapped startups:

Here are some examples of successful businesses that started out as bootstrapped startups:

As evident in the above examples, bootstrapping a startup, if successful, can bring increased margins than raising outside capital from the beginning. However, it also has downsides. It is therefore crucial for founders to thoroughly understand the trade-offs. Firstly, the advantages of bootstrapping a startup include:

Advantages of Bootstrapping a Startup

Disadvantages of Bootstrapping a Startup

Outside capital is any capital acquired from sources outside the company. There are various external sources of capital: equity capital, preferred stock, debentures, term loans, bank overdraft, etc. However, this particular section mainly focuses on venture capital.

Although the above examples highlight the power of venture capital, not all companies backed by venture capital have turned out to be successful. Many of them failed even after raising millions due to various reasons: low market demand, intense competition, faulty product/service/business model, etc. Below are some examples:

Founders should also fully understand the advantages and disadvantages of raising venture capital before they decide whether or not it’s useful for their own startup.

Disadvantages of Raising Venture Capital Include:

Deciding Between Bootstrapping and Raising Outside Capital

Before deciding whether to bootstrap or raise outside capital, founders should take many factors into consideration. Some important factors include: uniqueness of the product/service, maturity of the market, pace of the startup’s current growth, length of the opportunity growth, and types of growth challenges and limitations.

However, founders are likely to be biased about the uniqueness and potential of their products/services, and outside capital may appear to be the solution for all of their problems (Kuppusamy). This could hinder them from making the best possible decision, so receiving advice from other founders with experience in both bootstrapping and fundraising can be helpful.

Although many startups have factors that can help them thrive without any outside capital, such as a strong position in a niche and industry relationships, there are some cases in which raising outside capital is necessary for startups (Rice). Below are some examples:

Additionally, founders may find this score sheet made by Kuppusamy to be a useful tool for deciding between bootstrapping and raising outside capital. It has a series of questions regarding a startup and different points associated with them (Kuppusamy). Kuppusamy suggests that if a founder scores below 30, he/she should consider bootstrapping and if he/she scores above 40, he/she should consider seeking venture capital (Kuppusamy).

Besides bootstrapping and traditional sources of outside capital such as venture capital, there are many alternative types of financing, and some of them are relatively new. This section focuses on the following alternative financing options: initial coin offerings, crowdfunding, accounts receivable financing, and revenue-based financing.

An initial coin offering (ICO) is the cryptocurrency industry’s equivalent to an initial public offering (IPO) (Frankenfield). A company looking to raise capital to create a new coin, application, or service can launch an ICO. Interested investors can then buy new cryptocurrency tokens issued by the company (Frankenfield). However, these tokens do not give investors any equity stake in the company. Instead, they can be used on the company’s upcoming product or service. Investors can also trade the tokens for profits if their value increases (Kharpal).

To launch an ICO, a company should create new cryptocurrency tokens first, which can be done via different platforms such as Ethereum, which provides companies with a toolkit for creating digital coins (Kharpal). According to Platform Review, Ethereum is the most popular platform used to issue ICO tokens; over 82 percent of ICO projects issue their tokens on Ethereum. Around 9 percent of ICO projects develop their own custom Blockchain platform for different purposes. Waves, NEO, NEM, and Stellar are some of the other popular ICO platforms that have had at least several successful ICOs held on them (CoinTelegraph). Also, the company usually needs to create a white paper outlining what its project is about, how much money it needs, what type of money it will accept, how long the ICO campaign will run for, etc (Frankenfield). In most cases, tokens are purchased with pre-existing cryptocurrencies such as Bitcoin or Ethereum (Kharpal). If the funds raised through an ICO are below the minimum amount required for the company’s project, they may be returned to the investors and the ICO is deemed unsuccessful (Frankenfield).

Many blockchain technology startups are now turning to ICOs instead of traditional forms of financing such as venture capital (Kharpal). An MIT Sloan assistant professor Christian Catalini, who has expertise in blockchain technologies and cryptocurrencies, estimates that “blockchain-based startups have raised over $8 billion through initial coin offerings since 2017, which far surpasses the $1 billion in traditional venture capital within the same sector” (Vereckey).

ICOs are largely unregulated in the US (Frankenfield). However, the Securities and Exchange Commission (SEC) can always intervene; if a new coin is deemed a “security”, then the company may have to register with the SEC (Kharpal).

Crowdfunding is another popular method for raising funds for businesses, enabling money to be raised through online platforms.

What is Crowdfunding and How Does it Work?

Crowdfunding is a fundraising method in which founders raise capital from a large pool of individuals using social media and crowdfunding platforms (Smith). There are a variety of crowdfunding types, but the three primary categories are: donation-based, rewards-based, and equity-based crowdfunding (McGowan).

Firstly, donation-based crowdfunding is any crowdfunding that does not offer any financial return to the investors, such as fundraising for charities and non-profits (McGowan).

Equity crowdfunding allows founders to raise capital by selling equity to investors, but without giving up any control (Smith). Investors as equity holders receive a return on their investment and eventually a share of their portfolio company’s profits in the form of a dividends or distribution. In order to launch a successful equity crowdfunding campaign, founders should make sure to prepare an executive summary of their company, a pitch deck, terms of their fundraise, their business plan, and their company’s financials (McGowan).

Founders considering crowdfunding as a financing option should keep in mind the rules set by the SEC:

Receivables finance includes a number of different methods a business can use to raise funds against the amounts owed by customers from outstanding invoices, also known as its trade receivables or accounts receivable.

What is Accounts Receivable Financing?

Accounts Receivable (AR) financing is a type of financing in which a financier provides a company with capital related to its accounts receivable. AR is an asset account on a company’s balance sheet that represents any outstanding balances of invoices to be paid to a company by customers.

AR of large companies may be considered more valuable than those of small companies. Also, newer invoices are usually preferred over older invoices by financiers because they have longer collection shelf lives (Tuovila).

AR financing is often referred to as factoring, and AR financiers are often called factoring companies. There are two broad types of AR financing structures: asset sales and loans.

When AR financing is structured as an asset sale, a company sells its AR to a financier and the capital received replaces the AR on the company’s balance sheet as a cash asset. Depending on the terms, the company may receive up to 90% of the value of its AR (Tuovila). With asset sales, the financier bears the responsibility of collecting the AR. Therefore, some financiers may:

When AR financing is structured as a loan, a company simply receives a loan from a financier based on its AR instead of selling it; its AR may be used as collateral for the loan. AR financiers such as Fundbox offer AR loans as well as lines of credit to companies based on their AR (Tuovila).

RBF is most often used by small to mid-sized companies that do not qualify for traditional types of financing such as bank loans and venture capital (Parks).

What is Revenue-Based Financing?

Revenue-based financing (RBF), also known as royalty-based financing, is a type of financing in which investors provide a company with capital and receive a percentage of the company’s future ongoing revenues until a multiple of their principal investment has been paid (Parks).

Typically, payments are made monthly and the amounts vary based on the company’s monthly revenue (Tetreault)(Hayes). RBF is often considered as a hybrid between debt financing and equity financing.

The main difference between RBF and debt financing is that RBF does not require fixed payments and any interest to be paid on outstanding balance. RBF differs from equity financing as founders retain their ownership in their company (Hayes).

RBF is most often used by small to mid-sized companies that do not qualify for traditional types of financing such as bank loans and venture capital (Parks). Capital raised through RBF is generally used to scale the company by expanding efforts such as product development and hiring staff. Examples of companies that offer RBF include: Lighter Capital and GSD Capital (Tetreault). Also, many venture capital companies are getting creative with RBF methods for companies in the Software-as-a-Service (SaaS) industry today (Hayes).

Below are the general terms and requirements for RBF (Tetreault):

In addition, because investors see better returns on their investment the faster the company repays, they usually expect companies to have a plan to increase their business revenues and typically evaluate companies’ additional documents such as bank statements and investor decks (Tetreault).

Advantages of Revenue Based Financing: