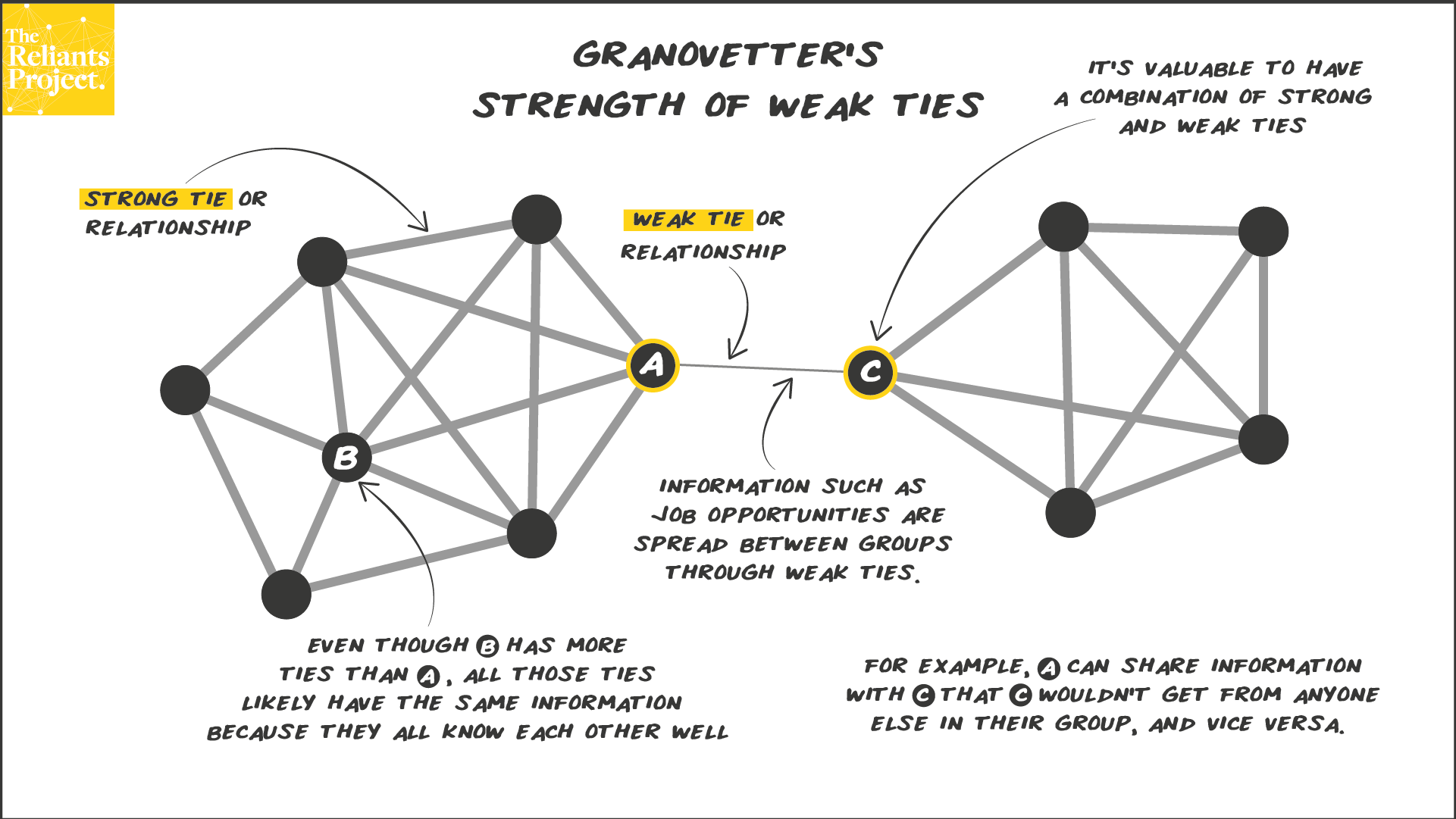 In 1973, Mark Granovetter published The Strength of Weak Ties exploring the idea that our weak social ties are more rewarding than our strong social ties when it comes to getting a job. That paper has gone on to be cited more than 63,000 times and shape many new hypotheses around the hiring process - including our own here at OnePager.

Here are the basics of Granovetter’s paper:

Within social networks there are two basic types of connections — or ties — to other people: Strong and Weak. Strong ties are those you have with family, close friends, and colleagues - people you know well and who know you well. Weak ties, on the other hand, are typically acquaintances or even strangers with common backgrounds. The strength of these ties can play a substantial role in how you interact with someone, what opportunities you have available to you, and your overall happiness.

More specifically, Granovetter goes on to show that people with weak ties to other networks are able to not only find jobs that others in their network can’t, but that those jobs are typically higher paying and lead to more satisfaction. This is especially true for higher-educated workers.

So how does this apply to my company?

As an individual, the lesson is clear - a healthy mix of both strong and weak ties will lead to the best jobs. As a company, these same principals can be applied to accelerate the hiring process.

When looking for a job you go through both strong and weak ties to inquire about potential openings. When marketing a job you push out the opportunity through the same channels in hopes of finding the ideal candidate. Given that the channels are the same - the benefits of weak ties hold true as they bridge the gap between networks.

As a company, the challenge comes in trying to find those weak ties and incentivizing people to share the opportunity with others. One common approach to this has been offering referral bonuses to active employees. By offering referral incentives to employees you can encourage them to recruit their network and expose the opportunity to more candidates. However, we would argue that this still misses the larger benefits of weak ties given that a member of that network is already an employee — a strong tie — and likely has limited weak ties to other networks.

We hypothesize that the larger benefits could be unlocked by offering the same referral bonuses directly to weak ties such as friends of employees and the community around the company. By making the same economic incentive available to people outside the company there would be an increased likelihood of being able to cross the bridge of weak ties into new networks and expose the opportunity to new potential candidates.

We built a product around this hypothesis.

Recruiting OnePagers now have built in referral bonuses that allow companies to easily incentivize their weak ties to share their job post. On top of marketing the bonus, OnePager automatically creates custom referral links for anyone who would like to send it along.

Check out the example pictured above here.

Our goal with OnePager for recruiting is to enable companies to leverage the communities around them to accelerate their hiring process. From here we will also be building out workflows to automate referral confirmations and payouts to make the whole process as smooth as possible for hiring companies, referrers, and candidates.

If you’re interested in leveraging this for your own hiring process you can sign up for OnePager here and try it out!

We also wrote about how to use OnePager to stand out when recruiting and you can check that out here.

Next: Talent Acquisition & Retention: A Guide to the Best ToolsPrev: A Step to Elevate the Diversity of Founders

How to Source Deal Flow as a New Venture Capitalist