A Step to Elevate the Diversity of Founders 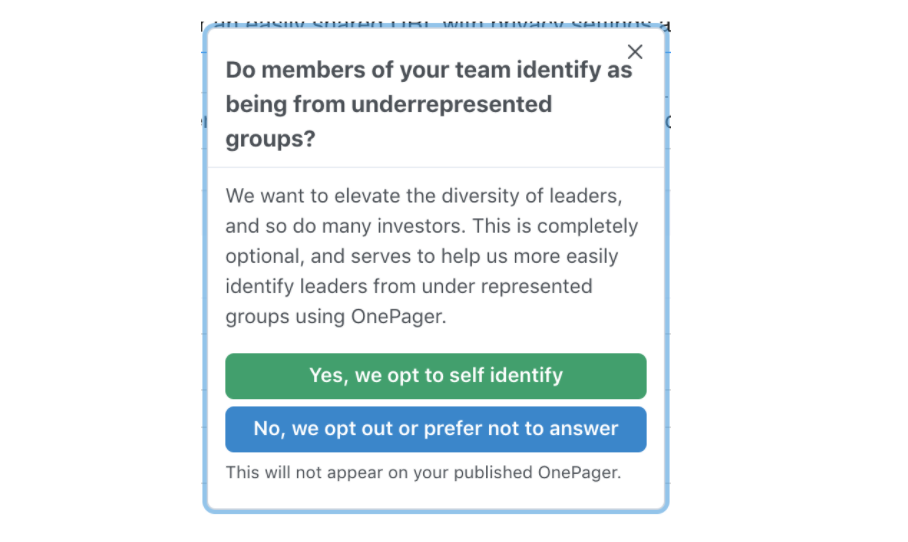 The lack of diversity among venture backed founders is immediately visible to anyone working within the startup ecosystem. Despite studies showing the superior effectiveness of diverse groups and the issues that have stemmed from startups built around homogeneous teams, the lack of diversity among founders has barely shifted in the last decade. A recent TechCrunch article from August 2021 succinctly stated the following statistics:

Some look at these numbers and blame the “pipeline” (although there are many challenges to this argument). The premise is that fewer people from underrepresented groups take an interest in STEM and entrepreneurship, leading to less founders competitively seeking venture, and eventually less companies successfully fundraising.

At OnePager we’ve reviewed fundraising materials for over 4,000 companies, and our window into the early stage fundraising world suggests the lack of diversity in venture does not lie in the “pipeline”. In our bi-weekly investor day newsletter, we always highlight 3 things: the amount of money being raised, the percentage of raising companies outside of the US, and the percentage of companies with a woman co-founder. Week after week, we see upwards of 40% of teams with a woman founder. Oftentimes that percentage is 50% or higher.

See the header for our last investor day on Thursday, October 7th.

Many investors have stepped in with a commitment to diversity, making their investment into under-represented groups core to their strategy and mission. See a few notable examples below with quotes from their websites:

These firms (along with many others I haven’t listed) have made improving the diversity of founders a pillar of their financial success, in addition to benefits for social good. So the engine for change is ready! The issue brought to our attention at OnePager is the difficulty in continuously identifying founders from under-represented groups.

The investors are ready, the founders exist, and we’re going to help bridge the gap between them. That’s why this week we were excited to launch a new feature to allow founders to self identify their teams as belonging to underrepresented groups.

The OnePager tool now includes a simple opt-in for founding teams to self identify. Currently, this opt-in does not show on a published OnePager, and it will only serve to help us more easily identify founders from underrepresented groups. Eventually we’d like to specifically highlight these companies to dedicated investment groups and publish statistics on the makeup of founders raising with OnePager. These are small first steps, but we’re excited for where this data could lead.

Let’s take a look at the new feature.

On the “Team” card you’ll notice a new button in the top right corner.

Clicking this button will launch a modal explaining our opt in.

If a team decides to opt in, we optionally ask which groups this team identifies with.

After clicking submit, the icon in the top right corner of the “Team” card is now blue to indicate that your team has opted in. Note again, this information will not be shown on your public facing OnePager.

And that’s it! It’s a small start, but we’re excited to begin collecting this data and helping to push forward more diversity among people starting companies.

Finally to address the elephant in the room, a quick peek at our about page reveals our founding team isn’t exactly diverse: we're three white men. It’s a bit awkward to talk about these things from my perspective, but I want to make it known that we recognize the issues in venture and are trying to do what we can while building a new business ourselves. With this feature, we hope to gain a better picture of who is fundraising and hiring, and look forward to publishing and sharing the results in the future.

Next: The Strength of Weak Ties and How Companies Can Accelerate Their Hiring ProcessPrev: Case Study: How Investor Day Helped HiHome Raise a Pre-Seed Round